30 YEARS AFTER THE FIRST VILLAGE OCCUPATION AGAINST COAL EXCAVATORS 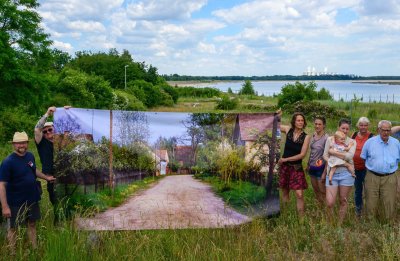 Lacoma was something special: a village that resisted its resettlement under the conditions of the GDR, later probably the first occupation of a village against lignite mining in Germany, then a temporary art and cultural free space and finally the occasion for the largest tree occupation in Germany at that time. A struggle that was still lost under the conditions of 2007, but laid the foundations for later successful lignite resistance.

At the invitation of the Cottbus' Grüne Liga group, many actors of the Lacoma resistance met on 11 June 2022 at what remains of the original site on the outskirts of Cottbus. In a photo action at the beginning, former Lacoma residents held a large-scale village view in front of the open pit mine, which is being flooded as the planned "Cottbus Baltic Sea". Lacoma was located at the edge of the open-cast mine - only a small part of the village is still recognisable, the largest part has disappeared in the open-cast mine. It was not easy for many to return to such a place. But in the end, the joy of seeing their companions again outweighed them - it was written all over their faces during the celebration. 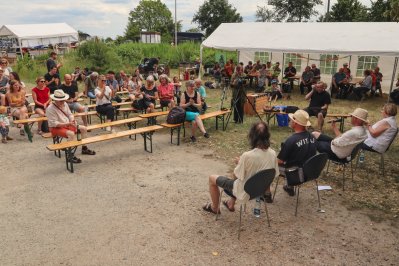 At the beginning, a panel discussion was dedicated to remembering. Karin Parnitzke, who grew up in Lacoma, told how five women from Lacoma travelled to Berlin in the 1980s with the aim of complaining to the Politburo of the SED. As moderator, René Schuster read out the call of the Grüne Liga for a revival campaign in the summer of 1991, the first Lacoma festival. Lothar Lehmann represented the generation of "new settlers" on the podium, young people from different parts of Lusatia who occupied the first house in the village in 1992 and revived the place that had just been abandoned. The resistance against the destruction of the culture barn in 2003 brought Daniel Häfner to Lacoma, who was able to report from that time.

The stage programme was deliberately based on the earlier Lacoma festivals. Singer-songwriter Pittkunings had already provided the right mix of atmosphere and thoughtfulness back then. Sorbian and German Lusatian texts met on a reading stage organised and presented by Torsten Mack. Afterwards, the group Serbska reja danced along to counteract the heavy textuality. Gerhard Gundermann had given three concerts at the Lacoma Festival in the 1990s. His songs were now performed by Gregor Wieland Weitze. The Cottbus art project ZMOT played music at the lookout point to the open-cast mine and the young Sorbian kolektiw wakuum presented itself with an information stand. Lari and the Pausenmusik proved their qualities as a live band later in the evening. 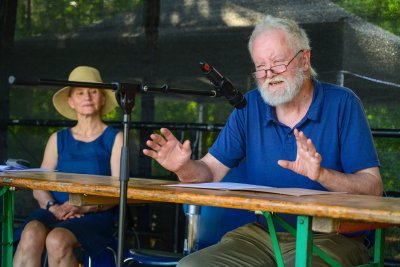 An exhibition of event posters, pictures and press articles brought the years 1991 to 2007 back to life as a "protest time travel". Those present could have their memories of their respective Lacoma times recorded in video interviews at the edge of the festival grounds. The great interest hardly gave the cameramen a break and eventually twenty such eyewitness accounts were recorded. On the sidelines, the experiences were also exchanged directly with today's young activists.

Setting up the festival for one day on a greenfield site was much more expensive than using the village in the past. In addition to donations and the Cottbus environmental group's own funds, the festival was made possible by support from the Sonnencent programme of the Schönau energy company, a grant from the Foundation for the Sorbian People and a donation from Robin Wood.

Report by RBB in the Wendish magazine Łužyca (5:37 min) 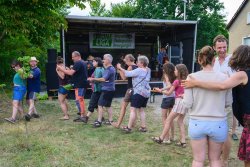 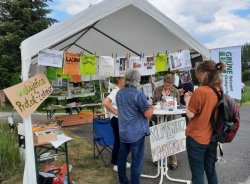